The waves part and a spray of water is propelled high into the air with a soft roar, heralding the arrival of one of South Africa’s most famous and beloved visitors: The Southern Right Whale.

Southern Right Whales inhabit the cold, Southernmost seas of the Southern Hemisphere in a population numbering around 10 000 individuals. Up to 18m in length and weighing in at up to a colossal 90 tonnes, these whales can be distinguished by their dark grey to black skin and white growths on their heads – these are called callosities and are unique to each individual much like a fingerprint. The characteristic long, arching mouth of the Southern Right begins above the eye and is lined with a hair-like filter feeding system known as baleen – for despite their size, these whales live entirely off a diet of tiny organisms, many of which are microscopic animals known collectively as plankton. Swimming with their mouths open, the whales use over 225 baleen plates to trap prey, which they can then swallow. One Southern Right Whale will eat over 1 tonne of krill, plankton, and copepods every day.

The Southern Right Whale got its name as early as the 11th century, when it was known as the “right” whale to hunt. Due to their slow cruising speed of 14kmph, these gentle whales were easy targets, and a thick layer of oil rich blubber caused them to float when dead. Once numbering over 100 000, the Southern Right Whale population was decimated to the point of near elimination. In order to save the whales from extinction, right whaling was banned in the 1900s. 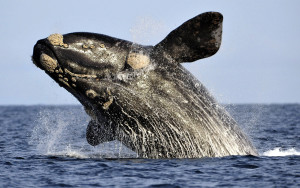 These magnificent ocean behemoths have spent the summer feeding in the icy waters near the Antarctic and have now come to South Africa’s Atlantic Ocean for one reason: love is in the air. In the winter months from June to October, Southern Right Whales visit their breeding grounds across the Southernmost reaches of the Atlantic, Pacific, and Indian oceans. Here, they come together to mate, and it is also here that last year’s calves are born. Females, known as cows, have strong maternal bonds and each female will return to her ancestral place of birth every 2-3 years to calve, ushering in a new generation of whales to continue the cycle. Calves are carried for one year, and weigh a massive 1-1,5 tonnes at birth, with a length of 6 meters. Suckling from teats near their mother’s vent, calves nurse for 6-12 months, and must quickly become independent enough to keep up with the herd or risk succumbing to predators. Southern Right Whales are intelligent and social animals, and cows have even been observed nursing and caring for orphaned calves.

Breeding and calving season is a unique opportunity in South Africa, a chance at a window into the lives of these noble creatures – and one of the best ways to experience this is undoubtedly by boat. Southern Rights are playful and curious, actively approaching human vessels and even raising their heads above water to get a closer look, in a behaviour known as spyhopping. Often, these whales will approach within an arm’s length of the boat, which presents an unparalleled experience for photographers and tourists alike. In South Africa, the highest concentrations of breeding and calving Southern Right Whales can be found off the rocky coast of Walker Bay, and here you will be able to find a guided cruise that will safely and expertly allow you to encounter the whales up close and in their natural habitats.

Other behaviours you may see from boats are sailing, lobtailing, and the well-known act of breaching, where the whale throws its body from the water and pivots onto its back, landing with a loud splash. Occasionally Southern Right Whales will be observed playing with fronds of kelp and interacting with other cetaceans like Humpback Whales and dolphins.

Though their time in our waters is relatively short and our viewing experience limited by winter conditions, we in South Africa are truly privileged to bear witness to some of most sacred events in the circle of life – and all right here in Walker Bay, the cradle of the gentle giants.